*Long post alert, but I would be really glad if you read through, please :)*

April 2nd 2011 – the day India won the world cup – the banks of Hussain Sagar – well past 12 in the night – we sat there talking about making a trip to Kargil on Vijay Diwas –  Friends S and A, Su and me!  We knew that it was going to be an experience of a lifetime if we could make it happen. It was decided we would and the preparations began – getting permissions to let us attend the Kargil Vijay Diwas, getting those messages for the Jawans from all over the world [Ekta Sandesh] and we never knew how time flew!

And when we did reach the Kargil town at 10pm on the 25th of July,  it just felt so unreal – was I really there? Really? Much time was spent then on to secure our accommodation because the hotel we had actually booked, had given away our rooms to somebody else! It was here that I realized, more than ever, how sweet and tender at heart our Jawans are. We made calls to our contacts in the Army in Hyderabad, and at 11 in the night, with very kind words, they got to work arranging the night’s stay for us in that little town with few options. All we needed was some place to sleep for about 4 hours and a place to freshen up early in the morning, because we were to leave to Dras, another 60 kms away from Kargil town – where the celebrations actually take place.  We went to meet a friend of our Army contact in Hyderabad, to get some shelter and while we were waiting for him to meet us, the Jawans at the reception treated us like we had known them forever. Making repeated calls to get our contact person, not letting me to even carry a chair to seat myself down and doing it themselves, telling me ‘aap baitho na’ when I went to take water and filling a glass for me, and actually telling us Sorry when nothing worked out on the accommodation front 🙄

We finally settled down in a pretty decent guest house, all waiting for the next day sun to shine soon.  We started for Dras at 6:35 in the morning.

Had some yummy breakfast on the way – poori, kala chana and one of the tastiest achaars I have ever eaten 😉

The peaks all along the route remind you of one thing – the cold climate, the rough terrain, the steep cliffs – how on earth do our Jawans manage to fight, let alone climb them?

You find inspiring quotes, war memorials all along the way. ‘Will x Skill x Thrill = Kill‘, ‘If you can dream it, you can do it‘ were few that I could register.

The route is picturesque, with the River Suru flowing all along, and merging with Chenab on the way – you can actually spot the confluence of the grey and the blue. 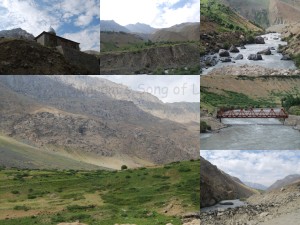 We reached Dras at 9.25 am.  We were asked a few questions at the gate about who we were, why we were there and then they let us in. 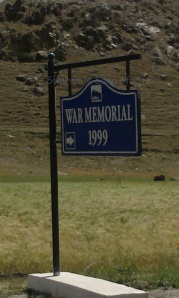 I had just not expected that the memorial actually stands and the program was being held at the place where we fought the war!

We could see all those significant points like Tololing, Tiger hill etc.. in the background.

Might sound dramatic, but at that instant, I felt like I had seen it all in life. Usually, my mind already starts planning the next trip wherever I am. But this felt like all I wanted to see in my lifetime. I turned around to see Su and my friends – they all had a child-like smile on them, a feeling that it was hard to believe that we were there, in that mighty ocean of Jawans everywhere reflected on all their faces.

The ceremony had begun with the kin of martyrs and other army men paying tributes by laying wreaths at the memorial. Ae mere watan ke logon and Kar chale hum fida jaan aur tan saathiyon were playing in the background all along. 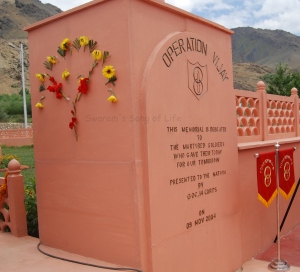 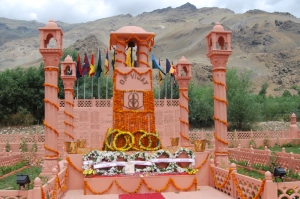 The Jawans were taking all the kids inside to keep them entertained and again we could see that other motherly side of the strong-and-tough heroic side that we mostly carry a picture of. 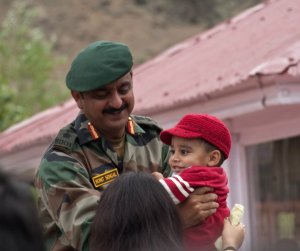 Helicopters showered petals over the memorial – a sight to watch under the clear blue skies, with the mighty beautiful Himalayan peaks in the background 🙂 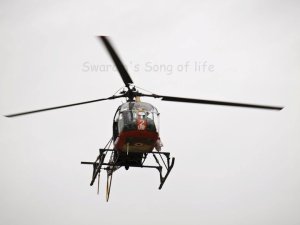 This wreath-lying ceremony was followed by Sainik Sammelan, to honour the living heroes of the Kargil war.

Here again, I went in search of water and when I did not find glasses nearby the source, one of them went running into their tents, got me his glass and then when I tried to take the glass from him, said ‘Pani bharke deta hoon na’. Sigh!

The Chief Guest of the function was a Lieutenant General, who beautifully said that ‘Tyaag ki bhavna har ek insaan ke andar hain. Zaroori nahin hai ki sacrifice maidan main hi hona hai, kisi bhi kaam karo – bas usme tann, mann aur dhan lagana. Whatever you do, do it with perfection. Kisi bhi desh ko himmat nahin rehna hain hamare desh par humla karne ke liye. So, all of you please stay alert.’ And such a great personality was so cool when we were introduced to him as a youth group from Hyderabad 🙂 He spoke about his times in Hyderabad, how he saw movies in RK theatre with his wife, asked people to join the army and unmarried people to marry armymen, saying that the life in army is so wonderful and added that the only thing is that you lose your hair, but you can always wear a hat 😉

And then, we got an opportunity to present the Ekta Sandesh to the Jawans. In such short notice, they organized a superb ceremony for us to talk about it, unroll the 100m long sheet completely and so many of them came forward, read the messages and congratulated us saying that we were doing marvellous work!The Lieutinant Genereal whom we requested to receive the same called on the other Jawans around and said ‘Give it to these young men, they do everything’. And three women officers we met were saying that they just do their duty, but we were doing things voluntarily and so, they were proud of us !?! What humility!!! Got a gift pack  from the army – a tee, a cap and a mug, which I will treasure all my life 🙂  The Jawans were so touched with the messages, took pics from all possible angles and were asking us how long we took, and appreciated the efforts which went into it all! How satisfying that was 🙂 Thanks to all of you who sent in messages and helped us in the cause too!

We actually rubbed shoulders with one hero who fought the Kargil war – Yogendra Singh Yadav. Got to take pics with him [I secured the place right next to him in most pics! Ya, am really selfish that way :P], had a nice chat session with him during lunch too 🙂  His message to everyone was ‘Niswarth kaam karte jao,  devotion to whatever you are doing is very important.’ He gave the example of an invisible brick in the foundation of a building.

When someone asked him if he was afraid, he said it so simply ‘If  I was, I would not be sitting with you all here today’ 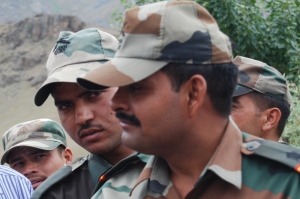 While we were having lunch, one of the majors told us ‘What is this? You people are not taking anything properly. Food ko attack karo. In the army, it’s all about attack attack attack .. ha ha ha!’

One of the majors came to us and took a seat asking us if we could talk. He then offered us to stay in Army tents for that night, the tents of his regiment which were actually being removed, but were kept so for us 🙂 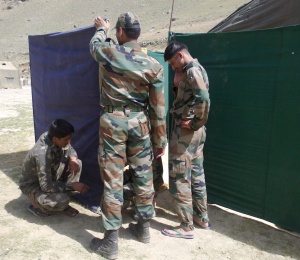 After lunch, he took us to our tents and we had a great time talking to him – he told us how they he got newspaper where he is posted after 3 days, how he loses sleep over even a blade of grass which is pressed upon, how they have to walk kilometers sometimes just to make one phone call and how [understandably so too] missing the family is the biggest thing. It was his birthday and he was saying that since there was no network there, he would try and call some people and get wished. We sang ‘Baar baar din ae aaye‘ for him and gifted him a YFS tee 🙂 He told us that it felt good to know people remembered them too!

Something which he said and I loved:

Salute to the courage and also the very fact that the leaders of our Indian army lead from the front – true leaders they are!

The way the Jawans took care of us in our tents really made me feel so guilty at being cared for so much – getting us juice as soon as we arrived, filling the water jugs, water for the rest rooms and when I requested them to allow us to do it all by ourselves, they said:

The ‘Beating the Retreat‘ function in the evening was like the icing on the cake. Like one of the soldiers at the gate put it, it was a ‘Sunehri mauka’ for us indeed.  The awesome parade, followed by recitation of prayers by religious heads from all religions and then an opportunity for all of us to light up lamps at the memorial in the name of the martyrs!

A spectacle was awaiting us too. All those significant peaks and  points that were captured were lit up simultaneously during the ceremony – and when we got to know that it was actually soldiers walking slowly with lamps in their hands, synchronizing between themselves with walkie-talkies, we were stunned!

We then went around the museum that the memorial houses and then returned to the tents for dinner. 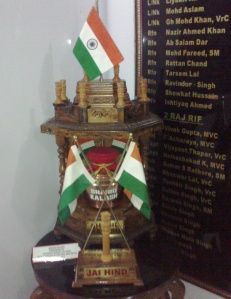 We were treated to an awesome spread by the Jats – their special Churma, Roti, Aloo Sabji, Rice, Dal, Semiya kheer – yummy yummy stuff!

They offered to make breakfast next morning too and when we told them that we had to leave early the next morning and so they should not take that trouble, they said ‘Koi baat nahin. Pack karke de denge’!

The next morning, it was time to leave Dras, but am sure none of us wanted to 🙂 When I asked them if they can employ me in the army kitchen, they actually took me to the make-shift kitchen in the camp and I made some pooris, while they all clicked pics he he 😉

And that one moment which left me inexplicably touched, proud, secure, goose-bump inducing …. everything in this dear country of mine …….

I saw these kids, their laughter ringing so loud across the camp while they played gleefully without any fear in their hearts … and this at ‘The Place’ where there were bunkers and bunkers all around 12 years ago – I just can’t explain that feeling!  Saw so much at Kargil, but this will be one of the fondest memories I will carry in my heart forever!

Let me end with this one board that I spotted near the Dras War Memorial:

I ONLY REGRET THAT I HAVE BUT ONE LIFE TO LAY DOWN!

Says it all about our brave armymen, doesn’t it? We have nothing to fear, do we 🙂 JAI HIND!

This site uses Akismet to reduce spam. Learn how your comment data is processed.