Stuffed Brinjal, traditionally known as ‘Ennegai” in the Kannada household is a well known dish.
This is a variation of Stuffed Brinjal known as “Guthi Vankaya” in Telugu, which I got from my friend Chitra. Thanks for this mouth-watering recipe Chitra.

Small,round,tender brinjals – 10-12
Remove the stem and make vertical slits in the brinjal such that the brinjal still stands as a whole. 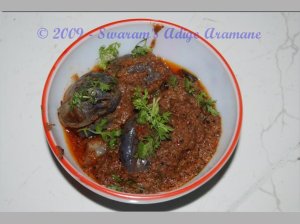 Take 2 tbsp oil in a wok. Add all the ingredients mentioned for frying and fry lightly. Now, combine these with the onion and ginger and
grind the same into a smooth paste. Now, divide this masala into two parts. Stuff the brinjals with this masala and use the other half for the gravy.
Now, take 2 tbsps oil in a cooker, add the tomatoes and the stuffed brinjals and fry them lightly and carefully so as to not break the brinjals for about 2 mins. Now, add the remaining part of the masala kept aside for the gravy. Add little water if required to get the desired consistency. Cook only till one whistle and switch off the cooker. Release the pressure immediately but slowly to arrest further cooking. Garnish with finely chopped coriander. Guthi Vankaya is ready to be feasted upon.

This site uses Akismet to reduce spam. Learn how your comment data is processed.